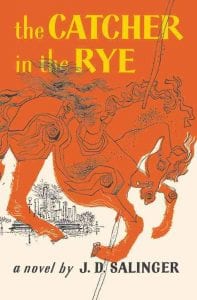 As the title may suggest I have indeed changed my book as even though Stephen king’s Cell is a wonderful book it will prove however difficult for analysis. I have instead chose Catcher in the Rye by J.D. Salinger. Within my new book the characterization of Holden Caulfield peaks my interest as it strongly reflects the attitude of the books author. Within the book Salinger writes, “ The both of them kept thanking me so much it was embarrassing” (Salinger 123). Caulfield is portrayed as teenager in his youth showing subtle emotion behind his actions yet recluses from situations that bring them to light.

Im a huge fan of Salinger and his work through Catcher in the Rye. He perfectly portrays the time period he encapsulated in his book and further does this by putting the readers eyes in Caulfield’s. The structure of following Caulfield through his life in the span of a couple days truly gives us a perspective of what Caulfield goes through and how he feels within the world. Salinger utilizes caulfield’s hat and represents it as an escape from society and a step back from the world for Holden which allows many readers who feel the same a way to relate to his character. Overall, Salinger does a wonderful job of portraying his world and characters within his book and is certainly one of the best. 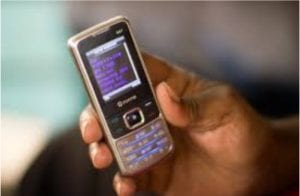 Stephen king’s, Cell has many interesting points presented within the story and yet the one that speaks the loudest is the point made implicitly about the role of cell phones and technology within our world. The cell phones serves as both a symbolic and physical plot point within the story all the while connecting to the outside world. King writes, “If you make a call or take one, you get some kind of a…what?…some kind of a subliminal message”(king 59). The story itself revolves around the strange happenings that occur in result of cell phones producing an odd signal. This in of itself is extremely important to my focus as it symbolizes the grip that technology and specifically cell phones have the lives of people today and how they have introduced new problems that were not present before their invention.

King being the literary giant he is has always introduced works of horror with his focuse on the human aspect within his stories and attempts to make his telling as realistic as possible. In Cell the same thing is true as King utilizes realism within a city setting and through the eyes of the main character. It allows the readers to connect with the character and be able to put themself in their position in an attempt to increase the “horror” factor in which it successfully does. Overall King once again, through his creative genius presents another story in which its premise and characters truly captivates the reader through its journey. 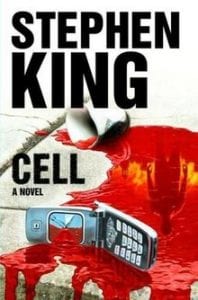 In Another work produced by acclaimed author Stephen King the greates fear doesn’t come form some mythical monster or creature but from an everyday object we all adore…the cellphone! Unlike many of king’s novels this one has its focus set on technology and proposes a hidden message and one that’s is a little less exciting than the story itself. King uses the cell phone as a horror and plot device to show its connection to the real world and how similar technology has made us all less connected and less human as we stay glued to screens and put importance of tech over people. As far as I’m concerned with the progress I made so far in my book I have been thoroughly enjoying it and every thrilling detail it offers. I hope to see this thrill ride to the end and see the conclusion of this interesting story.

With this being another Stephen King novel it only makes sense to compare it to his other books. Works like Cujo, Christine and It which all focus on “normal” objects and how in the right context they can become some of the most horrifying things on Earth. It’s no different in cell in which people’s phones have the ability to alter someone’s mind and turn them animalistic resulting in them going crazy and lash out at any one nearby. With a similar theme it also holds a similar setup as it highlights this certain object in its “natural” habitat and when it picks up momentum it begins to take on its true form and in Cell it happens so quickly that if you blink you’ll definitely miss the intensity that King builds along with the story. For those looking to read a horror book that can hold its own in modern day then Cell is the perfect choice as it’s a thrilling nonstop action novel that makes you want to read until the end.

Welcome to your brand new blog at Edublogs!

To get started, simply visit your blog’s dashboard, edit or delete this post and check out all the other options available to you.

We can walk you through step-by-step in our guide to getting started with your blog.